Cornerstone Bulldogges
Nunley's Miss America
"Missy"
Missy was a red and white female from Nunley Ranch Bulldogges and she was our very first dam here at Cornerstone. She was as sweet and mellow as they come and loved nothing more than going for a ride in the car. Missy gave us a great start here a, with our first litter of 9 beautiful pups! She has now crossed the Rainbow Bridge, but we wanted to keep here on our Dams page because she was truly our first momma dog. We affectionately referred to her as "Momma" since she helped us raise anything that came into the house, from pups to kittens and even our own children! Missy will always be a beloved member of the Cornerstone Family.
NBA CH. Nunley's Shotgun Minnie, CGC
"Minnie"
Minnie comes to us from Nunley Ranch Bulldogges. She is a large (20 inches at the shoulder and 90 pounds) brindle and white female with solid structure, good bone and effortless movement. Minnie has excelled in obedience and show handling and has performed beyond our expectations in the ring. Minnie started earning titles at 16 weeks old, beginning with her AKC STAR Puppy title. She earned her NBA Champion title in 2015 as well as her  Canine Good Citizen title. Minnie is very easy to handle and train because she is exceptionally intelligent. Minnie is a natural athlete and watching her move really is a thing of beauty! We feel that she will have a lot to add to our program, as her pups seem to share her thick bone and correct structure. 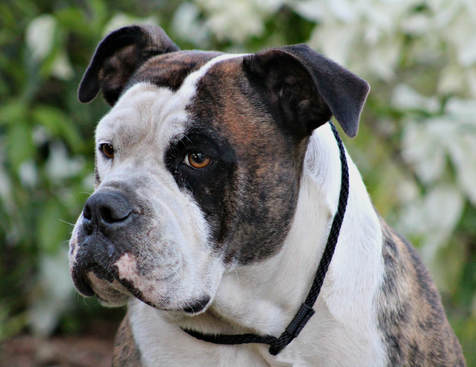 Moxie is another addition from Nunley Ranch Bulldogges. She is a red and white female with a personality that cannot be contained! She is a solid girl both in structure and temperament. She is a laugh a minute with her antics and her running "commentary" on everything that goes on around here. She's earned her AKC STAR Puppy award and her Canine Good Citizen title. She earned her therapy dog certification with Therapy Dog International in June of 2016 through Therapy Dog International. Moxie earned her champion title with the NBA in March of 2017. However, where this girl excels is as a breed ambassador. She has been on many visits to schools and local children's programs teaching about dog manners and safety. She is always the first in line for the petting sessions at the end! 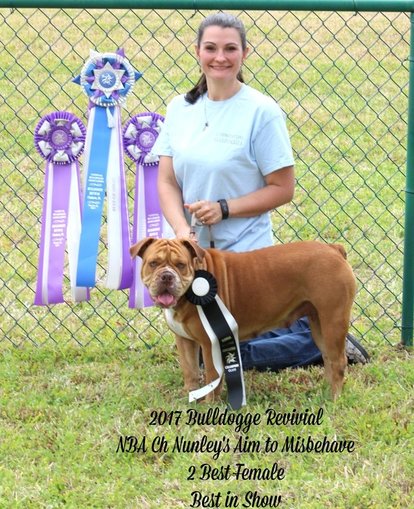 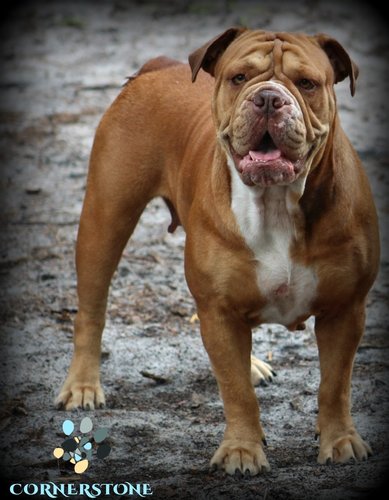 ​ Cornerstone's Keepsake
"Korah"
Korah was born right here at Cornerstone!  She's still a pup just yet, but she's already showing us that she is as smart as a whip like her mother and as pretty as her father was as a puppy! We are so excited to watch Korah grow and evaluate her for our program. Her Embark DNA panel has already shown that she is free of any genetic diseases and inheritable issues!
​ 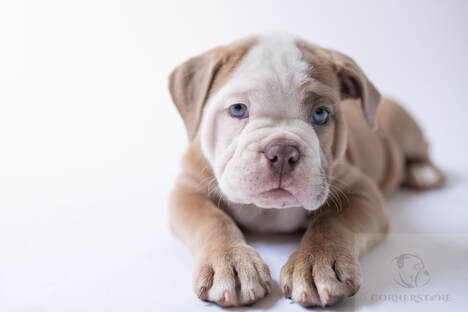 Raven is another lovely addition from Nunley Ranch Bulldogges. She is a black bulldogge with ticking, heavy, heavy bone and good movement. She is a "talker" and tells us what she thinks about EVERYTHING all day long! That's earned her the nickname "Whatcha Say Ray?" We just love this little lady and we are very excited to see what she adds to the Cornerstone program! Raven has been Embark DNA tested and is free of any inheritable genetic disease.
​ 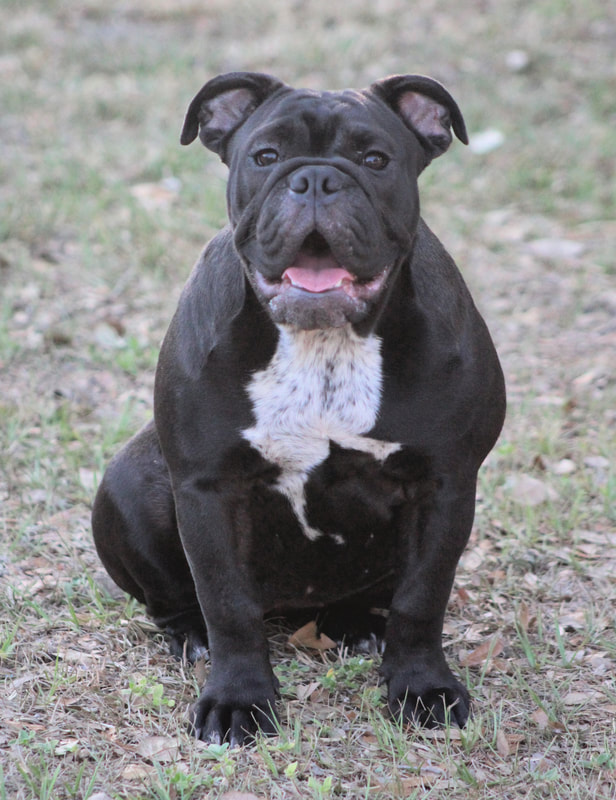